what feels like  a recurring nightmare, trying to keep to some kind of constancy and seeing that its been so long since I wrote anything, where to start ?

I am now living in Dorset on the coast in Boscombe, two years has gone by and as I sit here looking out the window contemplating on what has happened and how I feel about it, I realised  how much these words will shape how I think about this time in the future. As my memory fades and the writing takes over what kind of rose tinted glasses was I wearing? and was the glass half empty or half full? 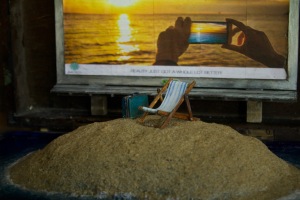 life is never that black and white, on the one hand my move to becoming more of an independent artist, that journey is well and truly underway. And could be more happy  about it,( more on that to come). but on the other hand, times are hard, money is tight and yes it can be a little lonely out here dancing like a loon to some kind of music that nobody else can hear.

Heres a brief synopsis on the journey so far of  “Ben the Artist in the 21st century” I moved to Dorset in June 2016 , In December 2016/7  I curated an exhibition called Stranger Worlds in the Royal Arcades in Boscombe, with a pop up Christmas shop too.  Then the real work got in the away or you could say I went and made some money. what ever way you look at it some other stuff happened then in October

I found out about a local Arts Fringe festival happing, so went to town with making and designing my show and in  April 2018 I became a commissioned artist for the Bournemouth emerging arts fringe and had my first solo show

So whats the point of this blog? good question.  I think this bit of back story is to get everyone on the same page, fill in some of the blanks with colour and if I can find the rhythm to keep this up who knows where it will lead. ( I hate that last sentence it sounds  pessimistic, almost like saying if I can be bothered. Come on Ben your better than that. ) ok ok I get it, it only gets done if I get on with it. So here’s to starting again of sorts. So back to the question at hand the best I’ve got at the moment is to document the journey from commercial artist (prop maker, hired gun, monkey with a pencil) to fine artist and all the bits in between and the ramshackle way I go about it, from the inconvenient need to have money to live on ( as off  the moment I’m digging a driveway) and try to explain how I come up with an image and the process it takes to make it happen, the wiring under the floor so to speak.  and how many cups of tea one can drink in a day…..

where does this leave us as of now. I’m starting to look at things as Phases.

I think the best thing for me to do now is to wrap this up with some kind of articulate, passing thought and maybe even a question to ponder over. Thinking about the date and that we are about to reach the longest day of the year summer solstice. The marking of any time has for me had a bit of melancholy attached to it, so maybe this is a good starting point to focus on the job in hand and the future plans and try not to worry about the what I haven’t done yet. Oh and Ben in the future put that down and get on with it….. and remember the its not weather the glass is half empty or full its whats in it that matter.